the chemistry behind hair dyes 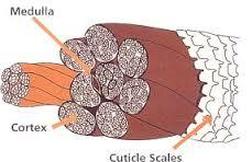 What is hair?
To understand the chemistry involved in hair dyeing, we first have to look at the structure of our hair.The hair shaft is made of a hard protein called keratin and is made in three layers. The inner layer is the medulla. The second layer is the cortex and the outer layer is the cuticle. The cortex makes up the majority of the hair shaft. The cuticle is a tightly formed structure made of shingle-like overlapping scales. The pigments, which are protein granules, are stored in the cortex of the hair beneath the scaly cuticle layer. It is both the cortex and the medulla that holds the hair's pigment, giving it its color. Chemically, human hair contains approximately 85 percent protein, 7 percent water, 3 percent lipid , 4.7 percent protein-bound sulfur (as cystine), and low concentrations of trace minerals (e.g., iron, zinc, copper). 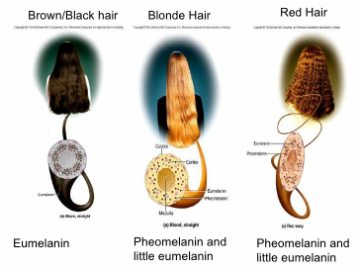 What determines the color in our hair?
There are two types of melanin protein found in the hair: eumelanin, which is responsible for hair shades from black to brown, and phaeomelanin, which is responsible for red and yellow-ish colors. Absence of pigment, produces white or gray hair. The melanin type and granule size determine the color of hair, while the density of distribution of these pigment granules determines how light or dark the hair is. 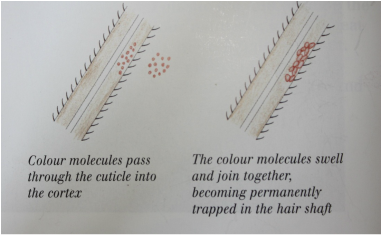 How do hair dyes work?
There are two main chemical ingredients in hair dyes, hydrogen peroxide and ammonia. Hydrogen peroxide (also known as the developer or oxidizing agent), helps initiate the color-forming process and creates longer-lasting color. It oxidize the natural melanin pigments in hair, removing some of the conjugated double bonds that lead to their colour, and making their molecules colourless. Peroxide breaks chemical bonds in hair, releasing sulfur, which accounts for the characteristic odor of haircolor. As the melanin is decolorized, a new permanent color is bonded to the hair cortex.
The larger the volume of the developer, the greater the amount of sulfur is removed from the hair. Loss of sulfur causes hair to harden and lose weight. Hydrogen peroxide is generally kept at thirty percent volume or lower.
The other chemical, ammonia, acts as a catalyst when the permanent hair color comes together with the peroxide. Ammonia causes the cuticles of the hair to swell, which then allows the dye molecules to pass into the hair and induce permanent colouring. It also helps lighten the natural hair colour in the presence of hydrogen peroxide. 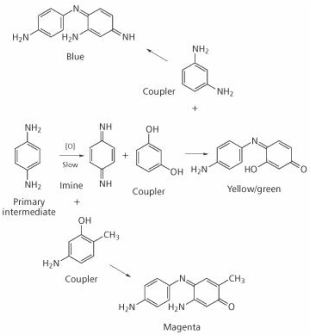 Other properties of the hair, such as the degree of damage and porosity, will also affect dye penetration. A high pH (usually about 10) causes the hair to swell and aids penetration, giving longer-lasting or 'permanent' colouring effects that are more resistant to washing.
The scheme beside shows the reaction of a common dye intermediate, 1,4-diaminobenzene, with three different couplers in the presence of an oxidizer at pH 9-10. 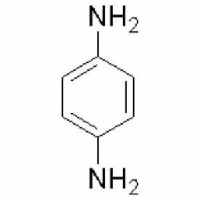 Why does hair appear to be in different colors?
The colorant contains two types of molecule known as the dye intermediate and the coupler, while the developer contains the oxidizing agent (generally hydrogen peroxide). One commonly used primary intermediate, paraphenylenediamine (PPD) becomes very reactive and produces dye molecules when exposed to an oxidizing agent. However, the PPD itself can only produce a dark brown color. To result in different colors, couplers, or coupling agents, are added to the hair dye mixture. They don't appear to be colored by themselves, but once reacted with the primary intermediate molecules, they can produce a wide range of hair dye colors. The concentration of the couplers is what determines the lightness/darkness of a certain color.
(The image on the right shows the structure of PPD) 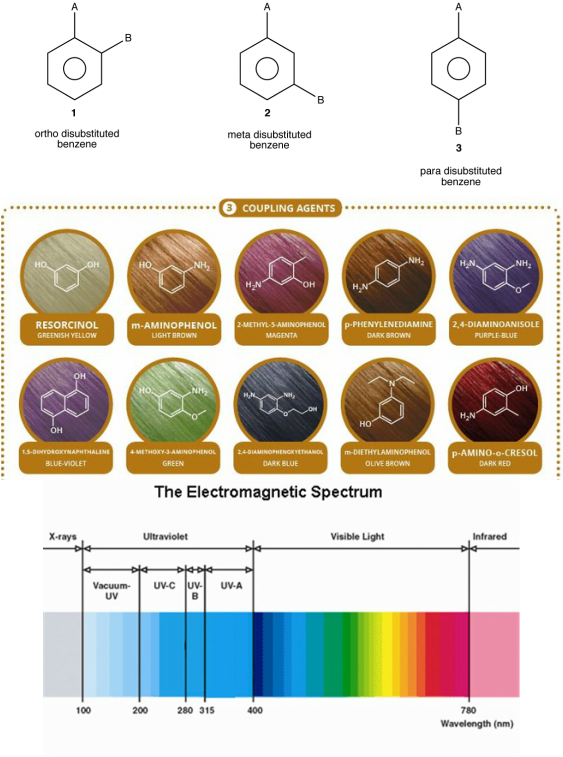